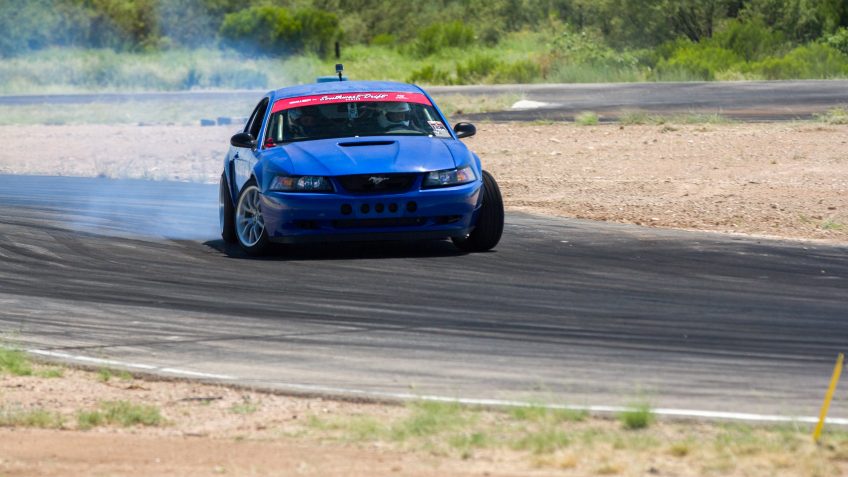 March 4, 2020 by Joshua in Uncategorized

The new edge mustang is actually built on the Fox platform and is the very last of that generation. It is the most capable and stiffest chassis with additional structural reinforcements and suspension upgrades and improvements over the previous generations.

While the Mustang’s MacPherson suspension setup remained in place, the SN-95 body got longer lower control arms, new spindles (sought after by Fox Body owners for 5 lug swaps) anti-roll bars, upgraded shocks/struts, and few smaller changes. Ford’s focus on reducing NVM and improving the car’s handling led to these improvements and gave the SN-95 better handling over the Fox Body. All 1994-2004 Mustang’s suspension was the same.

The GT model of the New Edge Mustang was the model that got the V8. All the v8’s in the GT model are the single overhead cam engine with 260hp and 302 ft/lb of tq.

Another big advantage the New Edge Mustang has over its predecessors besides the chassis, suspension, and engine performance is the manual transmission options! The T-5 that’s in the older versions of the Fox Platform have been known to be very weak especially when upping the HP and Torque of the older 5.0 V8 engine.

The T45 can be found behind:

There are ways to improve your T-45 transmission if you’re invested in maintaining the T45 rather than replacing it. Most of the best ways to modify the transmission involve addressing the weaknesses that were present at manufacture. For example, the input shaft is known to be overly fragile, so upgrading to a 31-spline slip yoke can improve the durability of your transmission. If you have an early T-45 transmission, then eventually you’ll also want to upgrade the 3-4 shift fork since they’re known to wear out early.

Some of the issues with upgrading a T45 revolve around how little aftermarket support there is for it, especially in comparison to the T5 and TR3650. For many parts, T5 replacements will work. For example, a lot of people when looking to upgrade their shifter go for a TR3650 one, but the T5 shifter will be a better fit. Forums are fortunately full of people sharing their experiences with trying out different parts.

These modifications can quickly become time-consuming and costly, and the T-45 doesn’t have nearly the support or abundance of junkyard parts that the T-5 or TR-3650 do. Because of this, many people with an SN95 Mustang decide that instead, they’d like to simply upgrade to the T-56.

Starting with the 2001 model year, Ford rolled out yet another 5-speed transmission known as the TR-3650. Like the T45, it uses a ribbed aluminum case with an integral bell housing. There were no variations between GT and Cobra versions 2001-2004. In 2005, the TR-3650 received a revised case and remote mount shifter for use in the 2005-2010 Mustang GT. All Mustangs equipped with this transmission use an 11″ clutch. Like the T45, the weak spot in this transmission is the 10-spline input shaft. The output shaft is a robust 31-spline. 01-04 transmissions use a rear slip yoke where the 05-10 variant uses a fixed flange. While the 01-04 3650 shifter appears identical to the T5/T45 unit, they are not interchangeable. The 3650 can be retrofitted to T45 applications if a Speed-Cal is used to compensate for the difference in speedometer signals. Gear ratios for the TR-3650 are:

The TR-3650 is factory rated at 360lb ft of torque which is a little confusing because there have been many, many examples of heavily modified cars, in excess of 500 ft lbs of torque using this transmission.

Even if the T-45 and the TR-3650 are rated for the same amount of torque from the factory, we would argue that the TR-3650 has an advantage because it is in so many more cars so if you blow one up, they are often easily found in junk yards!

So what modifications do you need to make in order to take the New Edge Mustang Drifting?

The short answer is not much, which is why it’s such an awesome platform.

One of the advantages of these straight axle Ford Mustangs, is that you can buy a mini-spool for the rear end that completely locks up the to rear axles for under $100. This is probably cheaper than it would cost to have someone weld the differential for you and definitely more reliable. Arguably the best part is that you can remove it if you want to do more street driving without dragging the inside tire.

Another necessity for any drift car is getting more steering angle. Luckily Drift American has developed some amazing products for those of us that want to drift mustangs.

Check out these steering knuckle for the New Edge Mustang

Drift American offers TONS of different options for drifting Mustangs including the above steering knuckles ($350) that can significantly improve steering angle for Mustangs.

Let’s take a look at the criteria we’ve been using:

1. Initial cost
2. Cost/effort for front angle kit (talking bolt-in kits that someone could install in their driveway)
3. Power/weight ratio
4. Cost/effort for driftable LSD (not including welding, mostly because not many of us have welders, and we want to be able to drive the car to and from the track)
5. Handling

So how does the New Edge Mustang stack up against the competition?

Based on this data then, YES! The new edge mustang is the best budget drift car available!

What do you think?