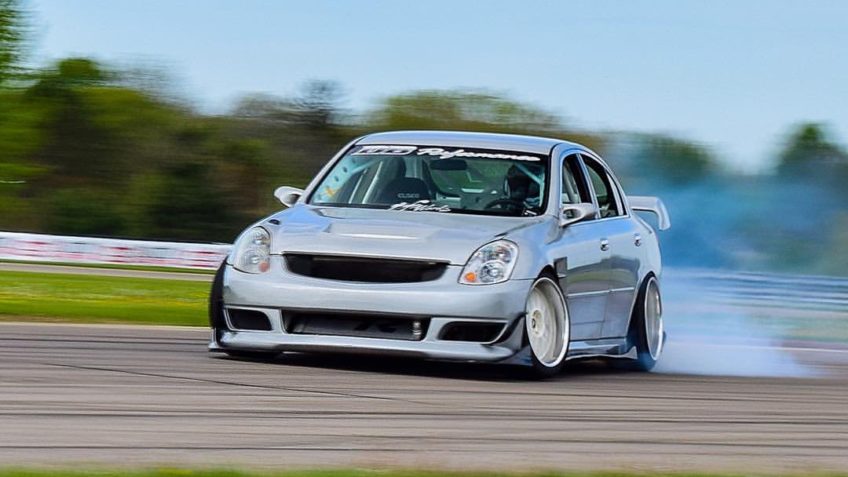 Infiniti G35 is a more luxurious Nissan 350Z. But, is it a better drift car? What’s the difference?

The Infiniti G35 is essentially the same drivetrain as the 350z being powered by the same VQ35DE naturally aspirated V6, and it’s amazing to me that you can find these cars for less than $5,000. The MSRP for a new Infiniti G35 in 2003 when they debuted was around $35,000, well equipped.

In a later article, I will compare the Infiniti G35 with all of the other options I’ve listed on the site–namely the 350Z, BMW e36 328i, Fox Body Mustang, and the 4th Gen Camaro, among others. In this article, I will detail some of the major differences between the Z and what changed over the years.

Maybe the biggest difference between the G35 and the 350Z (besides the obvious appearance) is the wheelbase. The wheelbase for the G35 is 112″ and that comes with 2 usable rear seats! The 350z comes in at 104″. Maybe a little easier to control the skids?

The G35 is also around 200lbs heavier than the 350z, but that does come with leather seating standard, and, of course, the ability to squeeze in 2 more passengers in the back seats.

This also brings up another interesting difference. The G35 actually comes in 4-door if you need extra usability (and I must say, I quite like the stealthy nature of the G35 sedan!). The sedan does come with an available 6-speed manual transmission as well. The G35 is also available in AWD, but because we’re discussing cars that will be used for drifting, we won’t be covering that option.

The G35 coupe weighs in right around 3,500lbs and the 4-door sedan is only about 50lbs more on average, and there are very minor differences in power between the 350, G35 Coupe, and G35 sedan.

There are, however, a few other notable performance differences between the three vehicles. The standard suspension on the 350Z is a bit stiffer as noted in the track testing by Motortrend. If you’re planning on adding coilovers for your drift built (which we highly recommend you do), then this is negligible and for your first few track events this is also not an issue.

Maybe the biggest (in our opinions) difference for performance options is the Brembo brake package. On G35 coupes equipped with manual transmissions, the Brembo brake package is standard! However, with the 350z, this is an available option (“enthusiast” model) and is not available from the factory as an option for the coupe. This makes the sedan a less desirable package for track duties without modification, however, it is easy to swap the larger brake package from a coupe if desired, but also isn’t really a factor for those wanting to start drifting.

So, which is the better drift car between the 350Z, G35 Coupe, and G35 sedan? This is really an individual choice and has more to do with how you are going to use the car and what you need it for. One of the biggest factors in terms of purchasing one is the number of them available. Our site obviously focuses on vehicles that are less than $5,000, and the numbers don’t lie…

In our search for 350Z’s, we found around 16 of them with manual transmissions, under 200k miles, no check engine lights on, and in good, drivable condition for under $5k. However, we found about 30 total G35’s for sale with manual transmissions in the above condition. This was split fairly evenly between coupes and sedans. So, in reality you have about equal number of 350z’s, G35 Coupes, and G35 sedans for sale nationwide.

Check out g35’s for sale HERE